Tina Osbey left New Orleans when told by officials to evacuate in anticipation of Katrina’s landfall. She and her three sisters, Crystal, Shasta, and Desiree, found their way to one the shelters offered by Christians in East Memphis. When the Osbey sisters and their families walked into the shelter, all seventeen of them opened their arms and hugged us all.

That embrace characterizes most of our experience together.

The children ranging from primary grades to seniors in high school enrolled in school and the sisters began their trek through the maze of assistance ostensibly available to evacuees. One queue after another followed by one snafu after another left them frustrated daily. I would be at school teaching all day and would drop by many evenings to see how things were going.

One day when Desiree finally got to the front of the line, the two FEMA reps couldn’t agree on what would work.

As the weeks went by, one of the sisters, Crystal, left with her two children. She heard FEMA had their act together in Houston. She left one weekend in mid- September and moved into an apartment by the next Thursday.

The same weekend Crystal left, Ken and I went to Atlanta to put our home there on the market. On the following Tuesday, the same day the virtual tour of my suburban Atlanta house went online, Tina found an aerial view of her New Orleans home submerged near Lake Ponchatrain.

As I looked over her shoulder at the computer screen, I felt I was living through a Tale of Two Cities.

After weeks of wrangling, finally the Osbeys experienced a ‘yes.’ They received FEMA vouchers. They found some apartments close by the shelter. The children would be close to their schools. The sisters loved the quiet neighborhood. They paid their deposits.

The Osbeys waited three weeks until the anticipated vacancies come about. Last week as they sat at the table ready to sign leases, the word came from “corporate” that they didn’t want to lease their apartments to the evacuees.

“Corporate” would not accept the FEMA money.

Wonder why? Because these new residents were black? Because they were poor? The lease was paid for a year.

Quickly arrangements were made for them to move to another complex—miles from the shelter and from the children’s schools--miles from the quiet of the East Memphis neighborhood that had welcomed them so warmly.

Last Friday night I went with Tina to the apartment complex that accepted the FEMA vouchers. As they moved the few belongings they have accumulated while at the shelter, gangs of young men walked around everywhere, staring.

When we dropped by on Saturday, dozens of groups of younger kids roamed around staring at the Osbey family.

The apartments, I was told by a sister from church, is known for being full of gangs. She lives only blocks away.

Last week’s celebration going on over “the evacuees finally getting their own place” belied Tina’s sadness. Protective of her boys, longing for them to experience a calm neighborhood and good schools, she ached at the prospects of living in this place.

Sunday afternoon as the Osbeys tried to walk down the stairs of the apartment, a large group of young men sat on the steps forcing the family to walk over them.

Monday night Tina called. “Beverly,” she said, “someone just shot a gun through my window. My window’s busted out. The bullets went right by face.”

An assailant in a black hood shot numerous times at a fellow running by Tina’s apartment. Along with the bullets shattering her apartment window several other gunshots marked the hallway outside her apartment.

Scattered shells surrounded Tina’s car out in the parking lot.

The sister from church who lives in the neighborhood went over to check on the family. A bunch of young kids milling around the yard outside Tina’s place filled the sister in on the details and were about to describe the assailant’s car when the police finally arrived. Suddenly the children knew nothing.

The police seemed indifferent. The apartment management didn’t board the windows. Tina and the boys spent the night in Desiree’s apartment worried that the few belongings accumulated since Katrina would be stolen.

Tina told me the apartment was broken into overnight although apparently nothing physical was stolen.

According to Tina, the day manager seemed indifferent to reports of violence and the break-in.

The Osbey sisters, though strong and charming stand in the column of those battered by more than Katrina. When the youngest, Desiree was six years old, their father shot and killed their mother while eleven year old Shasta looked on.

Since the Osbeys came to the shelter, those of us working together to offer a theme a temporary home and some comfort, along with learning to love and laugh with them, have learned in bits of pieces a little of what its like to grow up black, in poverty, and in poor health.

We pray the embrace experienced at the temporary shelter will continue to encircle the Osbeys and the other evacuees who have captured the hearts of scores of Memphis Christians eager to offer to comfort and assistance.

We see the vast needs created by Katrina, exacerbated by issues of poverty and race, demand the combined efforts of Christ’s church, the business community, and the government.

Meanwhile Ken and I believe the pulling of the plug by “corporate” bears investigation.

We feel deeply that FEMA and all levels of government nearly breached the social contract in the wake of this disaster. 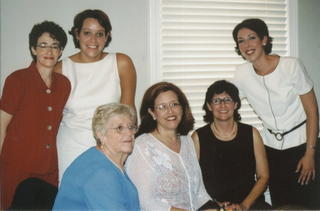 “Dark rooms. There are some very dark rooms.” Shirley Dowdy Plunket, eyes closed, uttered these words under the influence of medications given after a surgeon amputated both of her legs last week.

What she saw in that altered state of consciousness reflected the reality of her journey over the last two years.

Many of you know Shirley Dowdy Plunket, the mother of my husband Ken, Jim Dowdy Jr., and Dorlea Dowdy Rikard. Through her marriage in her seventies to the late Lamar Plunket, she is the proud stepmother of Trudie Plunkett, Bonnie Plunket Barnett, Rodney Plunket, and Joe Plunket.

Reaching the status of octogenarian on September 23, friends and family members alike will quickly agree with Rodney’s wife, Margaret, that in spite of the fact that she is eighty; Shirley is simply not OLD. Her grandchildren, the Dowdy’s, the Rikards, the Plunkets, and Barnets, don’t think of her as old. Her grandchildren call her on their cell phones. The grandkids call, not under duress, but because they genuinely like talking to her.

Young people have always loved to talk to Shirley.

She’s not old, but in her eighty years the collection of folks for whom she has been a nurturer, a listening ear, a hostess, a bearer of gifts, an encourager, and a comforter may be akin to the descendants of Abraham—as hard to count as the stars in the sky.

After coming of age in the mountains around Denver, marrying her World War II GI sweetheart Jim Dowdy, and settling in Huntsville, Alabama, Shirley walked through life remembering what it meant to be a stranger. She turned that reality into a home renowned for hospitality. Scented by her cooking and baking and infused with her love for special occasions, every room in the Dowdy home sparkled with holiday décor and glowed with the warmth of her welcome.

The Christmas before Ken and I married she welcomed not only me to her home, but my mother and sister from Michigan, and my sister, her husband, and infant son from Atlanta.

Photos displayed in the hallway of her home included young men who had lived with them at various times mixed right in with the photos of Jim Jr., Ken, and Dorlea.

If there were pictures of all the weddings, showers, teas, and parties hosted by Shirley, the hall could not hold them all.

As bright as the rooms in the family’s home in Huntsville were, they could not keep Shirley from walking through the valley of the shadow of death. After over forty years of marriage, she lost Jim to cancer. Within a few years of that loss, she walked to the gravesides of both of her two surviving brothers.

Shirley turned that path into a ministry of grief recovery blessing scores of others surviving the loss of loved ones.

The brightly painted rooms in the home she eventually built in Florence, Alabama provide a light backdrop to picturesque displays celebrating her various affections—children and grandchildren, the Southwest, crystal, cookbooks, a plethora of cool gadgety items, and her years with Lamar.

Taken from her active church and social life, the joy of travel, and her usual paths of service by a devastating staph infection, for the last two years Shirley brightened rooms of hospitals and nursing homes by her spiritual response to the intense suffering she endured. Last Thursday she submitted to a double amputation of her legs due to the unrelenting infection in her knees.

Resolute and understandably a bit fearful, Shirley helped me and others around her cope with her condition. As time for surgery approached, it was gut wrenching to me to think of her losing her pedicured feet. I cried when I saw her closet and remembered how much she always loved shoes.

But as family members sat nearby and listened to her positive assessment of the situation and her faith in the Lord, I thought of the passage in Romans extolling the beautiful feet of those who carry the good news.

When she muttered about the dark rooms, I thought--Shirley Dowdy Plunkett, you have passed through some dark rooms, but no infection, no surgery, no power on this earth, can take away your beautiful feet.


She would love to hear from you.
Shirley Dowdy Plunkett
Mitchell-Hollingsworth Nursing and Rehabilitation Center
805 Flagg Circle
Florence, AL 35631