The vicissitudes of pollen and Prague 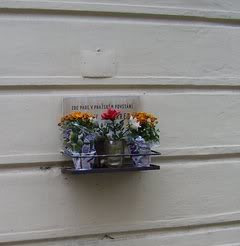 The vicissitudes of pollen and Prague was written shortly after spring break, 2005.

My hairstylist's appointment book won't budge until after the big dinner. Twenty essays demand grading. Driving to school, my hair at the miserable can't do a thing-with-it-until-its-cut stage; I glance down noting the floor mats need vacuuming. The brake fluid light shines red and the low coolant light beams yellow. Yellow pollen covers the car. The windshield wipers, sans fluid, turn the dust into yellow granular slimes. As I pull out a quick glance at my mailbox garden reminds me that the mulching is undone and the snapdragons await planting.

Thoughts turn to home and five loads of laundry awaiting sorting, suds, drying, and worst yet--putting away. Thankfully the Christmas tree is down and put away, but weeks after Easter the fancy eggs from Prague still need nestling in their storage box. Problem is, getting that storage box out would mean opening the pantry which would remind me of the need for grocery shopping and restocking. Restocking the pantry will remind me again, that my husband and son are vegetarians and that I just don't have a good rhythm for meal planning yet. So, it's been three years. My pre-vegetarian meal planning rhythm wasn't all that great either.

Thinking of the stack of unread news, home decorating, and church leadership magazines irks me momentarily until I refocus on the irksomeness of the driver in front of me who seems to think blinkers are for ordinary people. I hope that a few minutes of NPR will help me focus on something more than the cruel vicissitudes of appointment books, pollen, and unread articles. Just my luck. It's pledge drive week.

How much more could go wrong?

Now it's nighttime. I stop working on my classes about 10:30 p.m. and contemplate a couple of pictures my husband Ken and I took on our recent trip to the Czech Republic.

First, Wenceslas Square. Home of the Prague Spring, 1968. Few folks can forget the thrill of seeing thousands of Czechs gathering there expressing their desire for freedom. Few can forget when Soviet tanks and troops crushed the nascent democratic movement.

I see the picture we took of a little wrought iron plant holder mounted on a tile on a building close to the square. I asked Ken to take the picture because I thought the plants were cheery and the wrought iron holder clever. Stepping closer, I saw some writing on the tile. Our friend, Eddie White, read the Czech inscription explaining that it is a memorial to a 50 year-old woman who was shot and killed at that spot in 1968.

Someone, perhaps her grandchildren, placed the color plants.

What luxury--no, what grace--to experience appointment books, pollen, unread magazines, and ungraded essays as the vicissitudes of life.

Thanks, Nita. I consider that high praise coming from you!